Speaking of grudges: out there in the dark, one waited. He listened, holding himself hard to home, but he’d been lonely too long, brotherless, sludge-stranded. Now he heard and endured   the din of drinkers. Their poetry poisoned his peace. Every night, turmoil: raucous laughter from Heorot, howling of harps, squawking of scops.

The opening of this translation of Beowulf can lead one to believe that the Danes were the equivalent of frat boys, partying with no concerns for their neighbors and Grendel was just their neighbor who just wanted some quiet. Some peace. When I first read this rendition of the classic, an image of a surly old man painted itself into my head with the Danes being rowdy boys. I’ve always been a fan of literature that shows the other side of the story, and while this isn’t that exactly it still gives similar vibes.

Heorot’s hall-dwellers caroused by candlelight, stumbling to sleep with the sunrise, replete,   lambs bleating comfort, ease-pleased, 100 until the night wakefulness moved their watcher to wrath.

Grendel is moved to action by the inconsiderate behaviour of his neighbors.

Grendel was the name of this woe-walker, Unlucky, fucked by Fate. He’d been living rough for years, ruling the wild: the mere, the fen, and the fastness, his kingdom. His creation was cursed under the line of Cain, the kin-killer. The Lord, long ago, had taken Abel’s side. Though none of that was Grendel’s doing, he’d descended from bloodstains. From Cain had come a cruel kind, seen by some as shadow-stalked: monsters, elves, giants who’d ground against God, and for that, been banished.

Grendel is painted as an unlucky person, judged by the universe to be unworthy. It’s understandable the massive tantrum he has then. Grendel was forced into Karen-hood by circumstance. Everyone has a snapping point.

The picture I drew is representative to me of that snapping point.The flaming footsteps are the wrath Grendel has been propelled to by the raucous noise.

Why it matters? I’m not sure that it does if I am being honest. I’ve been told that I have a unique way of looking at things sometimes and while many people see Grendel as a monster, I don’t think I can view it that way. Even in the versions where he is clearly a monster I have reservations. Viewing someone different as monstrous when they’ve been treated as an outcast is wrong. Am I saying they could have been friends? No. But invading someone else’s land and polluting it is not the answer. 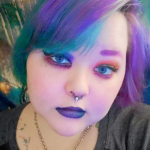