I saw Midnite three times. It was a great show, and many of my friends were in it, so I wanted to be able to see them perform as many times as I could. It was an adaption of Shakespeare’s A Midsummer Night’s Dream, about a group of college students who go into the woods to make an awful horror movie and find themselves in the middle of a marital spat between two forest spirits — very similar to Shakespeare’s version! The whole time, I found myself trying to find all the comparisons between the two shows.

First, there were the four lovers. In Shakespeare’s version, it’s Hermia, Helena, Lysander, and Demetrius. Hermia and Helena are friends. Hermia is supposed to marry Demetrius, who Helena is in love with, but she is in love with Lysander. In Midnite, the lovers were named Hermione, Helen, Andy, and Damian, respectively. Hermione and Helen are former roommates who kind of hate each other now, Andy is Hermione’s boyfriend, and Damian is Hermione’s ex who Helen has a crush on. Pretty similar to the original, but with a modern twist, which I liked!

In A Midsummer Night’s Dream, one of the subplots is about a group of amateur actors trying to put together a play to perform at the wedding of Theseus and Hippolyta, the king and queen of Athens. In Midnite, the players are replaced by the group of college students, led by Quillian (Peter Quince in the original). Their movie is about a donkey who was experimented on by the government who murders people in the woods. The “Death Donkey” is played by Nicole, representative of Nick Bottom in the original. Besides those two, the students working on the movie don’t really represent any particular characters in the original– instead, they are replaced by the four lovers.

The highlight of A Midsummer Night’s Dream, for me personally, is always the players and Nick Bottom. Midnite definitely succeeded at keeping this. I thought that many of the funniest scenes were the ones where they were filming the movie, which was accompanied by some really cool projections so the audience could see what the camera saw!

Overall, I thought Midnite was really funny, although I am a bit biased. It being a world premiere, there were some parts of the script that felt a little cheesy, but I thought everything came together to make a very entertaining show! 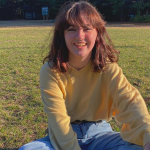